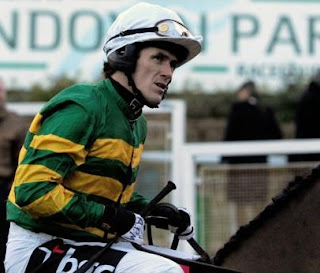 Great end to the week, mainly due to the weather.

A couple of weeks ago, I bought tickets for today’s meeting at Uttoxeter races, despite the clash with the Premier League climax and the opening day of the French Open. A great decision, there’s nothing better than being outside on a day like we’ve had here in the Midlands.

I decided to have a £5 bet on each of the seven races, and started badly when my choice in the opening race fell at the first hurdle. I took this as a sign that this wasn’t likely to be my day. Things got better with a winner in the third race ( Eleazar at 5/2 ), and I had a second and third in later races. Really chuffed with my win in the bumper ( Get Me Out Of Here at 7/2 ). It’s great to get a win at the end of the meeting, recovering your losses, and it was the one race where I had conviction about my selection.

Despite my limited racing knowledge, I was convinced that Messrs McCoy and O’Neill wouldn’t have made the trip from the Cotswolds to go home empty-handed, and the earlier two O’Neill/McManus horses had failed miserably. So I went with their unraced 5 year old, and McCoy brought it home without fuss.

Had a quiet week on Betfair, having missed today and also missed Tuesday night ( Maximo Park concert in Brum ) and Thursday night ( no sport by the time I got home from work ). More low points than high really, but managed to crawl into a modest profit with Stepanek’s win over Gaudio today ( I was confident enough to leave that bet open when I went out for the day ).
Worst loss – placed a lay on the away side in an Asian Champions League tie between Gamba Osaka and FC Seoul selected from the ‘Wednesday In-Play’ coupon. As the match time arrived, the game disappeared from the in-play coupon. Why do Betfair do that? To make it worse, Gamba led before conceding the FC Seoul winner in injury time. Bollocks.

Lots of fuss this week over Mr Ferguson’s team selection for the game at Hull. It all fell flat, with all four teams in jeopardy losing. I don’t think anyone can complain, if you can’t put up a performance when everything’s on the line, you don’t deserve to succeed.
Posted by Rob The Builder. at 22:18