And Away From Cheltenham..... 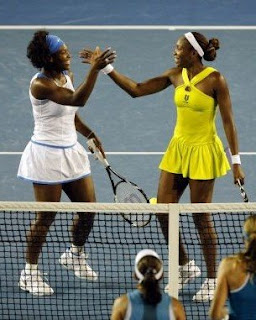 The third biggest sporting event this week ( after the Champions League and that other event ) is the WTA/ATP tournament at Indian Wells, California. My research uncovers the fact that in the year 2000, the City of Indian Wells had a population in 3,816. City? There are more people on the industrial estate down the road from me.

Of this huge population, 96.33% were white, and only 0.39% were black (er, that's 15). This may possibly have some bearing on the treatment the Williams sisters received a number of years ago from the crowd at the tournament.

Good on 'em, they subsequently told the organisers to shove it, and haven't been back since. I suppose it's easier to do this with $50 million or so in your back pocket.

It occurs to me that we'd be in trouble if Robbie Savage or Christiano Ronaldo took the same view.
Posted by Rob The Builder. at 20:11