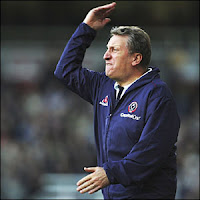 One of those 'I don't believe it' moments yesterday in the Bristol City / Crystal Palace match. Early in the game, Palace's on-loan striker, Freddie Sears, banged a shot into the goal and headed towards the corner flag to celebrate, whilst crestfallen City defenders dropped to their haunches. The ball had hit the back corner stanchion, and bounced back out onto the pitch. Bizarrely, the referee continued play, and apoplectic Palace players hurried towards the linesman. After a referee /linesman discussion, no goal. Ridiculous. The body language of every player ( and the crowd behind the goal ) said goal. How on earth can that happen? Surely, the ref can just ask the City goalkeeper?

My reaction? Desperate sorrow for Palace? No, a hearty laugh. Neil Warnock is such an arrogant tool, he is the one man in football who I would wish such unfairness on. And he managed to live up to his reputation, refusing to shake hands with the City players at the end of the game, and falling out with Bristol manager Gary Johnson, who he suggested should have let Palace score unoppossed to remedy the situation. The precarious nature of any manager's employment means that Johnson sensibly kept his head down. On the BBC highlights show last night, Warnock suggested that there is a conspiracy against Palace, and that this wouldn't have happened to any bigger team.

I've nothing against Palace, but the guy's a knob.

With regard to the 'goal', this is the second time this has happened in a couple of seasons in the Championship, and it ain't good enough. Sack Sepp Blatter, and get in someone who will allow technology (or sensible rules for officials) to correct these cock-ups.
Posted by Rob The Builder. at 11:46