The End Of Summer 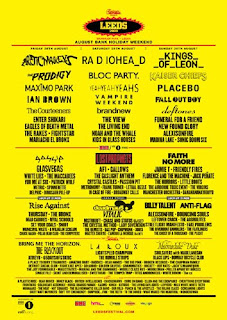 Well, my summer anyway. Anyone who follows this blog will be aware that I am a regular festival-goer, and tomorrow brings the last major event of my year – the Leeds Festival. I have a particular affinity with this event, particularly as I originate from the locality. It always has a mix of music to suit my taste, and I have the advantage of a nice comfortable bed each evening rather than a crappy tent ( my in-laws are fifteen or so miles away from the site ).

I watched Villa earlier, ending their European season before Autumn commences. Many have questioned the merits of the Europa League, and O’Neill’s team selection for tonight’s game suggested that the league games either side of tonight’s game were his priority. What struck me was that the crowd seemed to have the same opinion. The Holte End had plenty of spaces, and the home fans were shown up by the Rapid Vienna contingent, who kept up a banging support throughout.

I might just get back home in time for a short session on Betfair on Monday evening, particularly as it is the opening day of the US Open, so I’ll save the August round-up for my next post. To summarise – it’s been better than July!

Now, where’s that cheesecloth shirt…
Posted by Rob The Builder. at 23:09