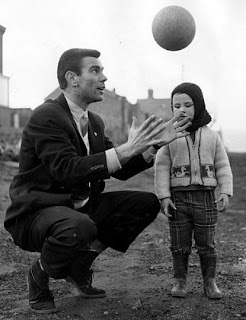 This week’s bans handed down to the four players involved in betting against their own team, Accrington Stanley, in May 2008 are a far cry from those incurred by those involved in Britain’s highest profile match-fixing case.

Like many, I believe the bans ( maximum one year ) and fines ( maximum £5,000 ) to be way too lenient for the offences commited. All four players had placed four-figure bets on Bury to win, pretty hefty sums for players on limited income.

Attitudes have obviously changed dramatically over forty-five years, in life generally and certainly within the FA. But it’s still worth a comparison to the events leading to the headlines of April 1964.

Peter Swan (pictured), David ‘Bronco’ Layne and Tony Kay were top players for First Division Sheffield Wednesday. Swan was an England international, and Layne had scored 58 goals in 81 games for Wednesday in the two year period up to the scandal breaking.

Layne was approached in December 1962 by a former teammate, Jimmy Gauld, to discuss how money could be made from betting on matches. Layne thought an upcoming match at Ipswich was a likely possibility, and had conversations with Swan and Kay on how they could ensure an Ipswich win. The three players all bet against their own team, betting £50 each at odds of 2-1( a new Mini cost around £550 in 1962, the players earned around £50 per week ). Ipswich won 2-0. Eighteen months later, Gauld shopped the three Wednesday players to the Sunday People for a £7k payment.

Swan, Layne and Kay were charged with bribery, corruption and defrauding bookmakers, and received jail sentences, as did Gauld and four other lower-league players. Upon release from prison, each player was banned for life by the FA. The life bans were lifted in 1972, but the players were by then in the latter years of their careers.

Swan probably suffered most from the scandal, having been England manager Alf Ramsey’s first choice centre-half prior to his ban, and having won 19 caps. His position was taken by Jack Charlton, who went on to win a World Cup winners medal in 1966.

In 1964, a bet of one week’s wage was punished with a life ban by the FA. In 2009, comparatively larger bets were punished with bans of a year or under.

The correct punishment is probably somewhere in-between.
Posted by Rob The Builder. at 23:12