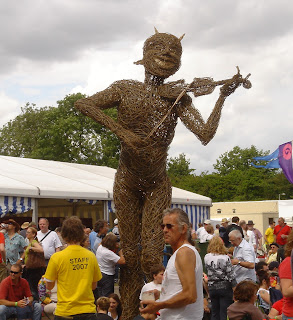 An end to my betting week and month now, as I have a 5 day break from the laptop. My July P&L suggests that I have had a poor month – a losing month actually, although the loss is insignificant. But I end the month feeling positive, having spent much of the period introducing myself to the roller-coaster ride known as horse racing, and also having spent more time analysing my results and strategies than in any previous month.

After trialling horse racing lays during the month, I’m of the opinion that it is possible to make a worthwhile profit. My performance so far has been inconsistent and haphazard, drifting from stake-raising invincibility, to ‘oh-sod-it’ random lays, and back to calm, considered and researched picks. What is clear is that racing offers many more betting opportunities than any other sport on a daily basis, and seems to have fairer odds available than soccer or tennis, simply because of the liquidity.

A bad month for Soccer. I think the issue has been the sparsity of opportunities. I am not the most patient of people, and often get sucked into transactions simply because there is nothing else available. So I’ll only return to soccer a couple of weeks into the domestic season, when there are enough matches to allow for selective trading.

My tennis month was dominated by a £200 hit taken on a low key ATP match between Kevin Kim and Denis Istomen. There were plenty of rumours about match-fixing beforehand, but there were also injury issues. Simple lesson learnt – if it looks dodgy, avoid.

So a three sport emphasis on Tennis, Soccer and Horse Racing from August onwards, and a change in attitude. My biggest issue since reverting to small stakes in March has been inconsistency. Keeping discipline for 6 days a week, and then having a gung-ho attitude on the seventh, is an easy way to utter frustration. So August will be all about maintaining focus.

I have often commented on the subject of targets, and I remain against putting unnecessary hurdles in the way of my trading. But I need an objective, or boredom will set in, and with it inconsistency. So I’ve retrieved from my memory bank a piece of corny management-speak –

Success at present would be around a thousand pounds per month, which looks ambitious on the basis that I’ve failed to reach that sum in the past four months. Yet broken down, this only requires a £35.00 profit per day, based on betting on 28 days each month. With a disciplined approach, I should have no problem achieving this. And that’s the issue. Not just for me, but for the majority of traders and gamblers. Read the numerous blogs around, and it’s probably the most common theme – discipline. If I can combine the control I had in place as a full-time gambler with the extra knowledge and experience I’ve gained over recent months, I have every chance of success. I don’t need a monetary target, I simply have to maintain focus and discipline and I believe the profit will follow. So my tough target – a whole month with no chasing, no ‘oh-sod-its’, no increased risk bets, and consistent staking. August – bring it on!

So time to head back on the festival trail. Sonisphere at Knebworth? No, much more sedate – the four day Cambridge Folk Festival. I’ve been for the last couple of years and it’s one of the highlights of my year. The ‘folk’ title shouldn’t be taken too literally, there’s a wide range of music, with headliners The Zutons, Los Lobos and the mighty Lucinda Williams. Who knows, it might even stop raining at some point.
Posted by Rob The Builder. at 11:42