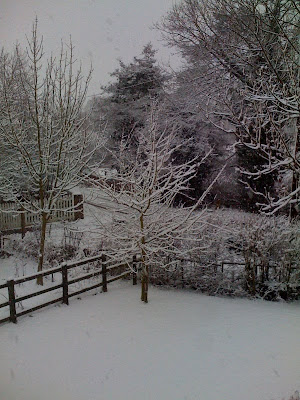 The picture was taken with my I-phone this morning from my bedroom window. Actually, we’ve suffered less than many parts of the country, with the main roads into Birmingham being clear this morning, although I chose to shorten my working day with a mid-morning journey into the city, and an early escape as the skies began to darken to avoid any freezing up of the roads.

I’ve had a quiet start to the betting year, and today continued in this vain, with much of the available sport falling during the period noted above. Yet the lack of bets has made little difference to my average P&L. A couple of thoughts spring to mind. Firstly, I seem to have found a way to take away the pressure I tend to put on myself, and am finding that opportunities are arising, rather than having to search for them. I’ve no particular aim at the moment except increasing my bank balance, and possibly I’m most effective when I don’t feel the need to make substantial profit. The confidence gained from the fact that I’ve been profitable for most of the last couple of months also helps. Secondly, I’m finally finding the best way to use Betfair Mobile. I’ve never recorded a separate P&L for I-phone bets, but I’m certain it would show a red result. Having Betfair open to you 24 hours a day seems a great opportunity, but it also leaves you open to lax bets. I’ve placed plenty of bets on the I-phone with considerably less research or information available to me than I would consider whilst using the laptop. I’ve now realised that it comes into it’s own for closing out bets placed pre-match. If you do your research, you can confidently place bets in the knowledge that you always have a back-up to green out ( or red out ).

I’ve returned to tennis betting with a little trepidation after the hellish end to last season. Things have started ok, but I’ve no intention have following matches into the early hours. The last two Australian Opens have ended up as big reds for me, so I’ll just pick around the edges of this Australasian season and make sure my body clock is in proper working order – better a decent hit rate from few bets than long sessions to feather someone else’s pocket. I’m not taking many risks, and seem to be taking all-greens at the earliest opportunity, but I’m £117 in profit in the year so far on the sport, and the words ‘profit’ and ‘tennis’ have rarely been mentioned together in recent months.

I’m currently in profit on football, tennis and racing. I had a losing punt on Pakistan to beat Australia in the 2nd Test, but I’ve made a couple of quid on darts. The BDO tournament did seem a little mickey-mouse at first after watching the PCD big guns at Alexandra Palace, but it does make good television – Stephen Maher beat me to the punch with a couple of posts here and here about an amazing performance by the Aussie Tony Fleet in the first round – embarrassingly bad, he’d have been laughed out of a pub playing like that. The standard seems to have picked up, and whilst there’s nowhere near the depth of quality in the BDO, Waites, O’Shea, Chisnall and Adams are decent players at any level. Hankey – he’d sink in the PDC, because he loses his rag too easily.
Posted by Rob The Builder. at 20:15