Back in April I wrote a post here about some iffy odds in the Greek second division involving a team by the name of Iliasiakos. During the summer, the club was merged with Egaleo F.C of Athens to form a new club in the second division, (Egaleo were in the fourth division) named Egaleo A.O. Athens.

Well the new set-up hasn’t stopped the dodgy odds. I checked Monday’s in-play games last night, and in a rare in-play Greek second division match, Egalio were at home to Ilioupoli. I took screenshots of the league table and Betfair odds at the time, as once again they just don’t seem to add up. For a team who are bottom of the league, without a win, playing a team unbeaten in their last three games, 1.45 for a win is way off – that’s similar odds to those currently offered for Manchester United against CSKA Moscow tomorrow at Old Trafford!

Anyone who’s read my recent posts would realise I’m in no position to take punts that the odds were wrong, particularly as the previous games I mentioned seemed suspicious. But I’m still interested in finding anyone who knows what the hell is going on in this league. 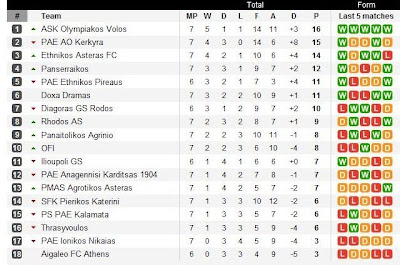