October - Fell at The Last Fence 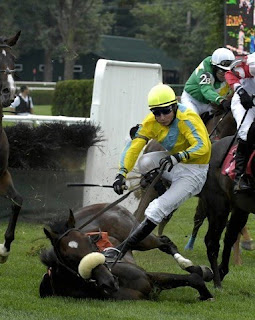 A tough month for me, following on from a dismal September. I began the month with a continuation of my previous problems – inconsistency, frustration and carelessness – and it took me a few days before I knuckled down to a serious attempt to recoup my losses. A solid effort over a couple of weeks brought me back level and I had scraped to around a £100 profit coming into the last day of the month. I was in an overall monthly profit position at the end of only five days – the 1st, 2nd, 3rd, 29th and 30th - and was at my high point of the month around 3.00pm yesterday!

An old demon cut those profits away to give me ( sorry for nicking Cassini’s line ) ‘Red October’. Yep, the old one-two. Chasing a loss. A bet on Bayer Leverkusen at 2-0 away at Schalke was looking good when the lead was maintained for 40 minutes or so, but the failure to green up was the source of what followed. Schalke brought it back to 2-1 with six or seven minutes remaining, but my frustration at a mistake compelled me to hold out for an all-green position. Then ‘market suspended’, an equaliser, and half the day’s profit gone. Time to step back and take a deep breath? No, time for a big horse racing lay to recoup my loss! Now I can bleat about being unlucky, but picking out an 11-1 winner (Bended Knee, Newmarket 4.15 ) is always a risk, and if your staking is inconsistent you’re liable to get stuffed. I did. Anyone who’s been doing this game will know how easy it is to undo weeks of effort with minutes of lapsed discipline.

As at yesterday lunchtime, tennis was my only losing sport for the month, football and horse racing the most profitable. The Bended Knee lay blew away my horse racing profit, so I ended the month with two sports in the red. I had bets on eight other sports, and not for the first time, all were profitable. As I have noted before, these were opportunities that opened up for me, rather than bets I was searching for. There’s a lesson to take on board.

So November begins back where I’ve been a number of times – a limited bank to attempt to build up (again). However, I currently feel no urge to deposit any cash into the bank, just a determination to put in the time and effort to recover my losses from the last two months through sensible betting. I’ve had two spells in recent months where I’ve earned good profits from disciplined and controlled trading. I have to keep that mindset in place for the whole of November – there’s little point in continuing with the inconsistency I’ve been afflicted with for periods of the last two months – I can’t afford a hobby which costs me money.

The positive for the month – in October I invoiced out my highest charges since I began self-employment in March, so the lack of any Betfair profit had no material impact upon my finances. I will make a profit in November, it may be modest but I’m now fed up of throwing hard-earned profit away with childish tantrums. A silver lining – I’ve begun November with a 14% increase on bank so far today.

Whether I can maintain profitability month in, month out remains to be seen. History suggests not, keeping discipline for long periods has not been a strength. And lack of discipline is now all that stands between my success and failure. Time to get real, or get out.
Posted by Rob The Builder. at 17:49