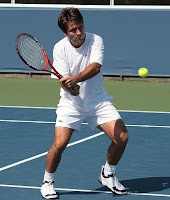 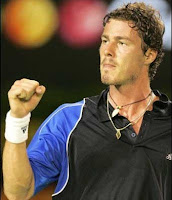 The end of the road for two of the ATP’s, er, characters – Fabrice Santoro and Marat Safin - who’s defeats in Paris bring retirement at the ages of 36 and 29 respectively.

Santoro could certainly be described as a journeyman, with a highest ranking of 17 over a twenty year career. But he has become better known as ‘The Magician’, due to his ability to cut ball-girls in half during changeovers in matches. Er, maybe I’ve got that wrong. The nickname came from Pete Sampras, and is more likely to be due to a playing style involving great variety and craft. In turn, this style was required to overcome his comparative lack of power, when opposed by bigger and heavier-hitting opponents. The Frenchman holds the record for grand slam appearances – 69 - and also won two grand slam doubles titles – at the 2003 and 2004 Australian Opens.

Trivia time – Santoro won his first Challenger title in Telford. Glamorous life, eh. And he remains one of the most famous people ever to be born on Tahiti.

Safin – where does one start. Massive talent, massive underachievement. He turned pro in 1997 and by 2000, at the age of twenty, he was world number one with seven ATP titles in the season, and became US Open champion by defeating Pete Sampras in the final at Flushing Meadow. After that, injuries and a baffling temperament saw him yo-yo up and down the rankings, but he never regained the heights of the 2000-2002 period, although a second grand slam was earned in Australia in 2005. Maybe Federer’s consistency and the emergence of Nadal hindered his progress, but his inconsistency was often head-scratching.

Personally, Safin became the first male name on my ‘avoid completely’ betting list. I also tended to keep away from Santoro – would he be overpowered, or bamboozle his opponent? But it’s sad to see the end of anyone on the ATP Tour who could be termed ‘charismatic’ – the sport is sadly lacking in such men.
Posted by Rob The Builder. at 18:35