One Down, One To Go 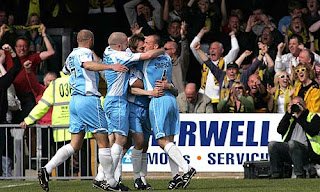 Like many people, my footballing allegiances come from, firstly, the place of my birth, and latterly, my recent residence. The fortunes of both teams has meant I have rarely announced these allegiances over the past couple of years. But with something to celebrate today, I can confess ( it is Sunday ) to being a supporter of both Burton Albion and Leeds United.

Today belongs to Burton. They came into their final match with the worst form in the division ( check out Cassini's preview ), and as many feared, they went down to yet another defeat at Torquay, despite taking an early lead. However, as often happens at this time of year, a result elsewhere ( Cambridge ) meant the outcome became irrelevant. The last 10 minutes of the game was less than eventful, with both sides happy to hold the result.

So league football next season in a nice shiny new stadium worthy of Division 2. Sadly, the major element of the club's recent success - one Nigel Clough - has moved on, and the dip in form can be attributed directly to his departure. At least there are now 3 months to forget the recent form and prepare for the next challenge. Dagenham & Redbridge, here we come.

As for Leeds, all fingers are crossed that the division's best player, Jermaine Beckford, can stay fit and card-free for 4 more games. He really is the key to success or failure.
Posted by Rob The Builder. at 23:59