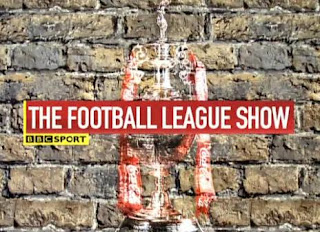 You know you’re getting old when……..

I understand the Football League Show will not be re-commissioned by the BBC after this season. It is deemed too expensive to make, in comparison to its viewing figures. I would like to give a solid
opinion on the worth of the show to the grass roots football follower, but I have to admit that after ‘watching’ for the last couple of years, I’ve never seen one whole episode!

My late Saturday evenings tend to consist of Match of the Day, followed by the F.L.S. My problems start when both Mrs B and I use the two sofas as mattresses rather than sitting upright. The routine then tends to go as follows:

Watch MOTD, watch start of FLS, drift off during the ‘main match’ in the championship section, wake during Yeovil versus Tranmere ( having always missed the Leeds highlights ), occasionally nod in agreement at some of Steve Claridge’s no-nonsense assessments, stay in a semi-conscious state through Sheffield United versus Wycombe, which then somehow morphs into Barnet against Aldershot, bypassing a dozen games. Then, finally, awake shivering to a BBC News 24 discussion on the state of Palestine at around 1.45am.

Welcome to life in your forties!


As a long-term blog reader with a huge google reader list (ooh, err missus), I have come to appreciate those who manage to write on a regular basis over a long period. Many blogs ( my own included ) falter through the writers’ inability to find new topics of interest. My own blog slowed as I struggled to find anything to say on the ‘defined’ topic, and find time for writing.

I’m hoping that my current situation ( both physical and mental ) will give me space to write. One of the reasons for the move to London was to make more of life outside of work. I could probably earn more, but I seem to have found a level of workload that means I have enough energy left on
weekends and evenings to have a social life ( at least until 11.00pm ish! ), and enough money to pay the bills. During the winter months, I’m happy to use time on Betfair as part of my income portfolio. I seem to be able to make a consistent profit when I treat a laptop session as ‘work’, even to the extent of leaving the flat and working from an office base or coffee shop for a defined length of time. When I play around at home, I tend to make bugger all.

I expect workload to naturally increase in the summer, and my time on the exchange to reduce accordingly, so the blog subject matter may drift from sport towards random matters. I’m certainly feeling optimistic coming into 2012, so here’s hoping that the reality matches my expectations.
Posted by Rob The Builder. at 12:11