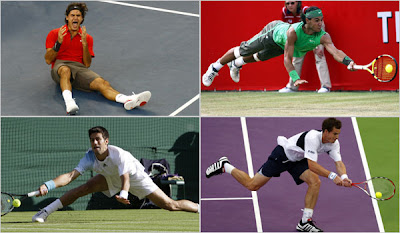 Last week’s ATP tournament winners were the Serbian Victor Troicki ( in a piss-poor line up in Moscow ) and Federer in Sweden. Whilst reviewing the results, I was aware of the lack of ‘breakthrough’ players who have made their mark this season. Only a few years ago, Nadal, Murray and Djokovic charged up the rankings to dispel the theory that Federer would be simply wiping up trophies for a decade. But recent times have shown little movement in the hierarchy. So I went on a mission to find ‘the next big thing’ from within the ATP rankings.

Starting with the top 50, a couple of the big movers in 2010 are injury related – David Nalbandian from 64 to 31 ( up 33 places ), and Mardy Fish ( up 37 places to 18 ). It’s also been a good year for Berdych, Baghdatis and Melzer. The former, along with Robin Soderling, can now be seen as a serious grand-slam threat. The Cypriot and Austrian have been on the circuit for a long time, and may be viewed as dangers to the top players rather than potential champions ( although I’d have said that about Francesca Schiavone a year ago ).

There are a few experienced pro’s who have moved up the rankings without being likely to make too much further progress – Llodra (32), Lu (34), Chela (41) and Niemenen (44) – and a couple who’ve been in the ‘promising’ camp for a couple of years and are now putting it together more consistently – Ernests Gulbis ( up 66 places to 24 ) and John Isner ( up 19 to 15 ). Both have an important 12 months ahead of them - if they are to be the breakthrough players, now is the time.

It’s in the lower reaches of the 50 that the most interesting candidates appear. Three players have really pushed on this year, and all are in the 21 to 23 age group, so should have potential for further improvement. Could the next big thing be one of the following -Andrey Golubev of Kazahkstan ( up 97 to 36 ), Thiemo de Bakker of Holland (up 47 to 49 ), or the Ukranian Alexandr Dolgopolov ( up 82 to 49 )? All are worth keeping an eye on. Outside of the above names, it’s pretty static.

It’s no more satisfying to trawl through numbers 50 to 100 in the rankings. There are few who seem likely to make a quick jump towards the top twenty. There are a couple of experienced pro’s who could ‘do an Ivanisovic’ and have an impact in a major if things fell their way – Fernando Gonzalez ( 61) and Ivo Karlovic (71). The rest are mainly journeymen, clay-court specialists or underachievers. It may be worth keeping an eye on the 22 year-old Lucas Lacko (75), and 23 year-olds Daniel Brands and Leonardo Mayer shouldn’t have their careers written off yet. But there is little to excite.

Below that, there are a couple of former junior champions who’ve failed so far to make waves at senior level. The 19 year-old Bulgarian Grigor Dimitrov must have a decent chance of making a breakthrough soon, whilst 21 year-old American Donald Young looks to have had plenty of chances and may have to be placed in the box marked ‘no thanks’. There may be someone lurking in the lower reaches of the rankings who will explode into the stratosphere – it’s happened before. But a quick view of places 101-200 throws up only a couple of names worth mentioning – Richard Berankis of Lithuania is a 20 year-old on an upward curve and Bollettieri Academy graduate Kei Nishikori of Japan has already made an impact, despite injury problems. There are a few names that have yet to come to my attention, so maybe I have a surprise in store in the coming months.