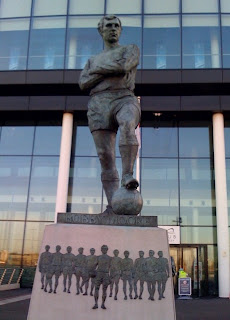 Ahh, my blog finally springs into 2011 action. Well, ‘action’ is probably not the most appropriate word - stuttered into 2011 fits the analysis better.

My major issue has continued to be lack of internet access. I’m struggling to justify paying for a phone line for the limited time I spend at the London flat, and the internet dongle was, as expected, rubbish. So I’ve had limited access to Betfair, but enough to give me a nasty loss in January - within fifty quid, a complete wipe-out of December’s profit. How? – being ‘unlucky’.

I’ve mentioned ‘unlucky’ before. This is an alternative word for ‘inconsistent’ or ‘reckless’. January was an unlucky month in that a few lays at large odds went down, and a couple of footy games went unexpectedly, leading to all-red trade-outs. But the decision to place the lays was in most cases ill thought through, and often was just a lazy push for quick profit. On a couple of weekends, an element of panic seemed to set in. I’m playing with a fairly small bank and the results will have no material effect on my life. Yet instead of leisurely nudging my P&L forwards, I felt the need to use every rare minute of internet access to make hefty profit, often well beyond a natural level for the bank size. I’ve proved to myself so many times that, with a little time spent on research, the bets will come to me. But often my impatience leads me to search for ways to gamble. I also tended to stray into laying at higher odds, which is dangerous on two counts, firstly the damage each failure does to your bank balance, but also the psychological damage of having hours of small wins evaporate in seconds.

One bonus from January – a profit from tennis. The last twelve months left me disillusioned with the sport as a betting medium, hit hard by my poor trading skills and an evolved market that made my profitable years seem long ago. But I had a near 100% record picking winners pre-match. My only loss came from a rare in-play trade when, as so often happens to me, I chose to go all-red when things swung against me. I seem to have little trouble holding my nerve during football trades, but the speed of turnaround in tennis continues to fray my nerves.

A note of caution for bloggers not aware of Google Reader. A successful blogger of recent times, John O’Dwyer, has hit one of those inevitable bad spells. Presumably in a fit of despair, he posted an ill-advised blog a couple of days ago, and then promptly deleted it, along with it’s predecessor. However, the post still shows up on Reader, so many of his followers can see the deleted posts. Best to post only after a moment for reflection!

The photo? I was around the Wembley area yesterday afternoon, and as my own team are unlikely to be participating in a cup final any time soon, I thought I’d have a walk up Wembley Way. It’s a pity the legendary Twin Towers have gone, and the arch isn’t as impressive in daylight as under floodlighting, but worth the ten minute detour. I’ve never had much inclination to attend an England game, but I may have to look for an opportunity to see some sporting event at the stadium.

And finally, minor celeb spotting update. Er, celebrities don’t come out in January – it’s cold. So just the one name for my roll-call – Spurs slightly iffy left full-back, Benoit Assou-Ekotto. Hopefully, the remainder of February may be stronger, celeb- and profit-wise.
Posted by Rob The Builder. at 11:35