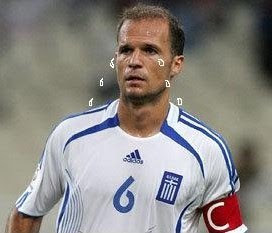 Is the financial world pressing on your shoulders? Has the turmoil of the last two and a half years left you worried about the future? Does every viewing of Newsnight leave you fearful that everything may cave in around you?

Give a quick thought to Angelos Basinas. He’s just spent the last fifteen months playing at Portsmouth. Tempted by Tony Adams to give the Premier League a try, within hours of signing Adams had been dismissed. Within a couple of months the team’s owner, Alexandre Geydemak, had sold up to the first of three subsequent owners. You know the rest.

At least it will soon be all over for Angelos for another season. He can go home for a relaxing summer break. To Greece.

I can’t confirm reports that Basinas has sheltered his irregular Portsmouth salary payments from potential financial meltdown at home, by holding an account with the Kaupthing Bank in Iceland.
Posted by Rob The Builder. at 18:33